However, an expanded and more inclusive decision-making model is not the only feature of co-management under the Nunavut Agreement. In fact, the co-management process with respect to wildlife can be described as a system of partnerships, in which the partners work cooperatively to assist the NWMB to make particular decisions, to conduct and commission research, and to provide approvals, advice, recommendations and information. In addition, it is Government that implements and enforces NWMB decisions, once they are made. 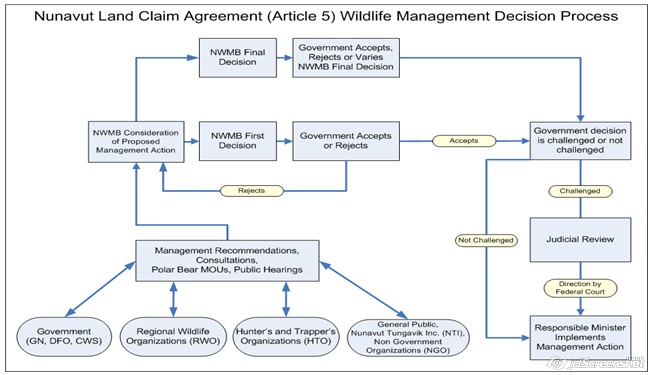 Other Institutions of Public Government (IPGs):

In addition to the NWMB, the Nunavut Agreement created other Boards to manage the land and resources in the Nunavut Settlement Area which include the Nunavut Planning Commission (NPC), the Nunavut Impact Review Board (NIRB), the Nunavut Water Board (NWB) and the Nunavut Surface Rights Tribunal (NSRT). The NWMB, NPC, NIRB and NWB, may act together as the Nunavut Marine Council when necessary to address issues of common concern relating to the marine areas of Nunavut.

The Nunavut Water Board was established as an institution of public government under s. 13.2.1 of the Nunavut Agreement. NWB has the responsibilities and powers over the regulation, use and management of water in the Nunavut Settlement Area.

Contact information and more information on NWB can be found at www.nunavutwaterboard.org.

The Inuit of Nunavut are part of the co-management partnership and are represented by Nunavut Tunngavik Incorporated (NTI). The Regional Inuit Associations nominate members to the NWMB. We also work with the national Inuit association, Inuit Tapiriit Kanatami on some issues.

For more information on NTI or the Regional Inuit Associations, please visit www.tunngavik.com/

The NWMB coordinates its activities with Nunavut's 27 community-based Hunters and Trappers Organizations (HTOs), and three Regional Wildlife Organizations (RWOs), which together work collaboratively with the NIWS. These organizations oversee harvesting at the local and regional levels, while the NWMB oversees wildlife management throughout the Nunavut Settlement Area. We also provide funding to these groups.

For information on these organizations, please visit www.niws.ca

The NWMB takes its direction from the Nunavut Agreement and carries out its duties as an independent body. We are not under the direction of other branches of public government, although we work cooperatively with them on most issues concerning the management of Nunavut’s wildlife.

Naturally; animals, birds, plants and fish don't recognize political boundaries, so it's important for the NWMB to work with other groups outside Nunavut on matters of common interest. Among these groups are: