December 2018 – The Community-based Monitoring Network project team headed to Taloyoak – the next community selected to participate in the project.

October 2018: The second Community-based Monitoring Network Annual Report has been distributed to participants. Download a digital copy from the reports section of our website.

August 2018 – Members of the project team trained an additional 67 Baker Lake harvesters during a follow-up visit to the community.

June 2018: Participants’ meetings were held in Kugaaruk June 22 and 23 to review data collected by the community to date. Those present confirmed that the data provide a good picture of the harvesting practices of Kugaarumiut.

April 2018: The project was launched in Baker Lake. Interested harvesters were trained and a community data clerk was hired.

February 2018: In a conference call on February 26, representatives from the Nunavut Wildlife Management Board, the Nunavut Inuit Wildlife Secretariat, and Nunavut Tunngavik Inc. met to review written expressions of interest from Nunavut communities that indicated they would like to be considered for participation in the Community-based Monitoring Network. Using a set of criteria developed by the project Steering Committee in 2011, Baker Lake was chosen to participate in the project between 2018 and 2021 (three years).  There were a number of strong applications, but the Baker Lake Hunters and Trappers Organization clearly demonstrated the need for monitoring their diverse wildlife populations as development continues to expand in the area.

December 2017: Participants’ meetings were held in Clyde River December 4-6, 2017 to discuss the project, and review data collected to date. They confirmed that the data summaries provided a generally accurate picture of current harvesting trends in the community.

December 2017: A salmon caught by a CBMN participant in Clyde River generated interest from Fisheries and Oceans Canada. The harvest record of what is believed to be a pink salmon represents the of the species recorded on Baffin Island.  The harvester will be working with Fisheries and Oceans as a community contact for salmon work in the area.

October 2017: The first Community-based Monitoring Network Annual Report is now available!  The report describes the CBMN approach, benefits to the communities, and benefits to wildlife managers and researchers, as well as providing a profile of participating communities. Hard copies have been mailed to participants. Download a digital copy from the reports section of our website.

April 2017: CBMN Meetings and Training Workshops were held in Kugaaruk. Nine new participants signed up, brining the total number of participating harvesters in the community to 27. The training included some time on the land, checking char nets. A great experience for the CBMN Project Team! 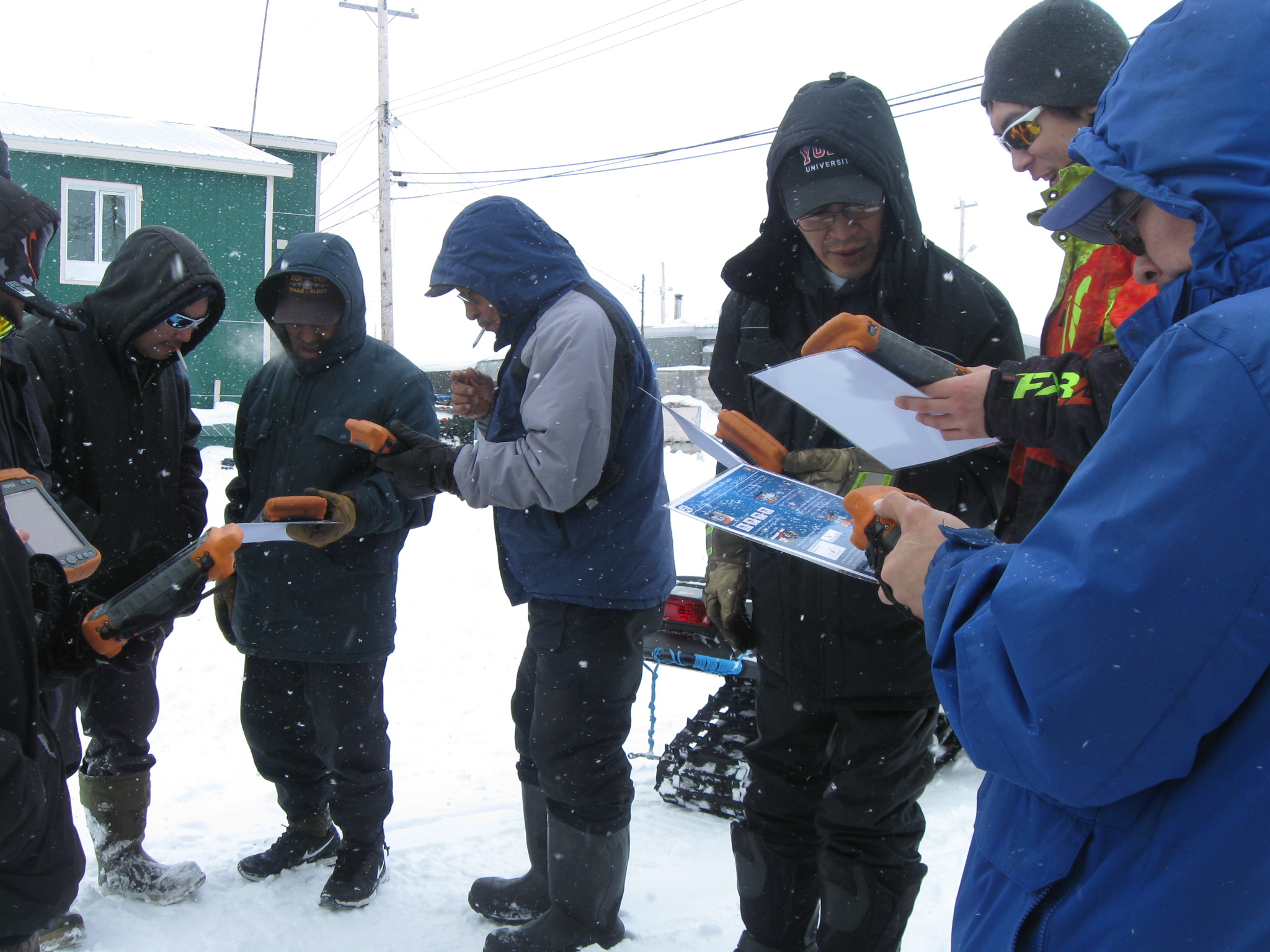 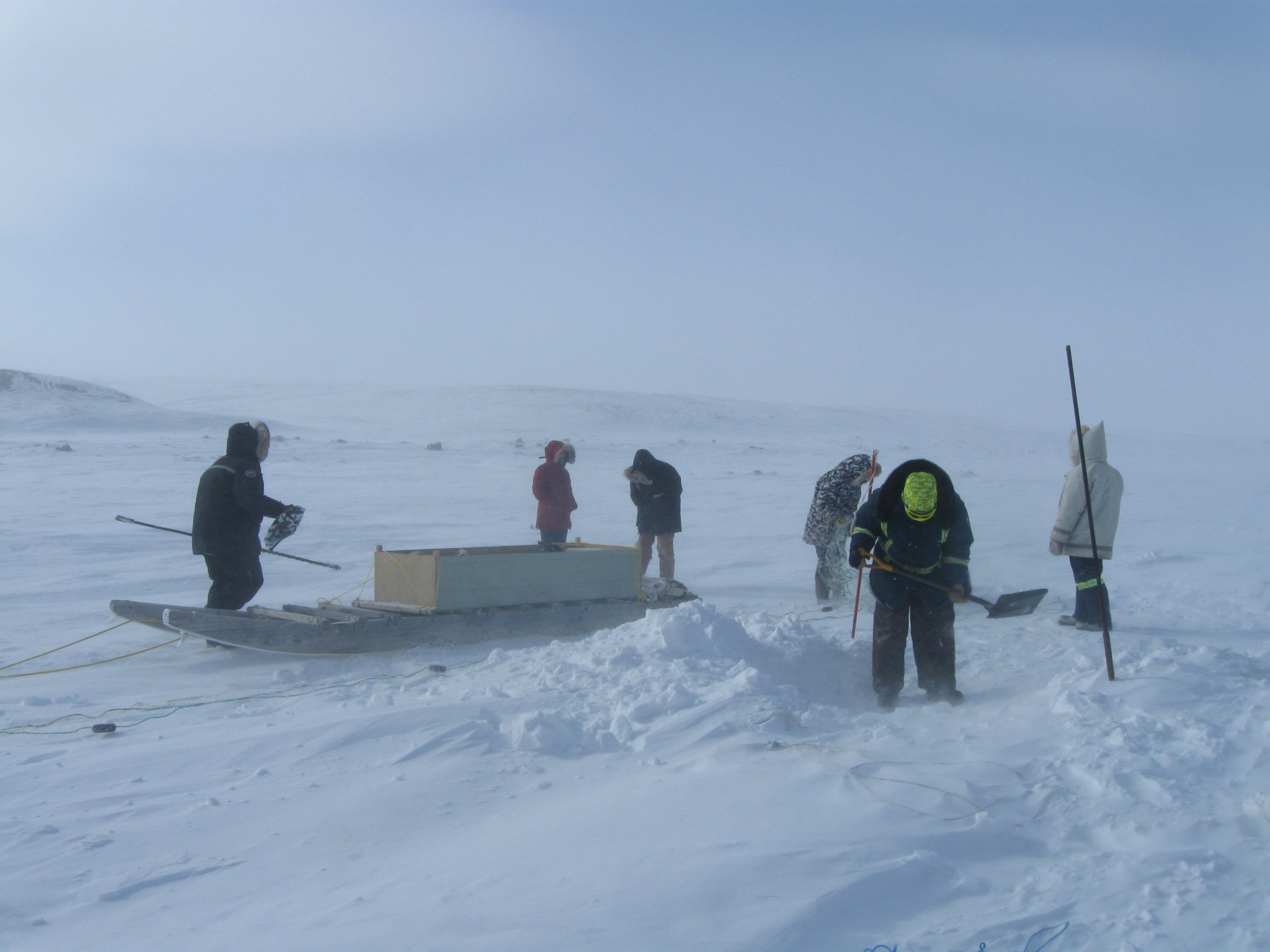 January 2017: CBMN Meetings were held in Clyde River between January 20 and 22. The first CBMN Community newsletter was produced.

December 2016: CBMN Meetings were held in Kugaaruk between December 12 and 14. The CBMN Facebook group was created.

November 2016: The NWMB contracted Rebecca Jeppesen of NovaSila Wildlife Consulting to assume the role of Community Liaison and Project Manager.

2016: Two snow machines were awarded to participants in the semi-annual major prize draw.

October 2015: The first data was added to the CBMN database by harvesters in Kugaaruk and Clyde River.

2015: Training workshops were conducted with harvesters interested in participating in the CBMN in Kugaaruk and Clyde River.

January 2015: NWMB is accepting applications for two (2) part-time data clerk positions, one each in Clyde River and Kugaaruk. The data clerks will join the project team for the Community-based Monitoring Network.

July, 2014: NWMB has issued a call for applications from interested communities to participate in the CBMN from April 1st, 2015 to March 31st, 2018. Deadline to submit an expression of interest form is September 15th, 2014

May, 2012: CBC radio reports on the CBMN initiative from Cambridge Bay.